We are so happy…we had a fantastic first performance in Bangkok and we celebrated our Soloist Adhonay Soares da Silva’s debut as Petrucchio in The Taming of the Shrew. Instead of trying to put it in a nutshell, we let the photos of our photographer and Principal Dancer Roman Novitzky speak for themselves…

Just before the stage rehearsal: Alicia Amatriain and Hyo-Jung Kang put on their pointe shoes next to the rosin box.

A lighthearted moment in the dressing room: Noan Alves, Adrian Oldenburger and Daniele Sillingardi with their efficient and always helpful dresser Kerstin Stahl.

After just two short days of preparation the first performance is finally here: Fabio Adorisio as Hortensio, Alessandro Giaquinto as Gremio and Martí Fernández Paixà as Lucentio in the first act.

Jessica Fyfe as Bianca. Her Australian parents are sitting in the audience. For them, Bangkok is much closer than Germany and they take advantage of the geographical proximity to see their daughter dance.

Alessandro Giaquinto also has a debut this evening as Gremio and wins the audience over with his quirky interpretation of the role. Here with Jessica Fyfe as Bianca. 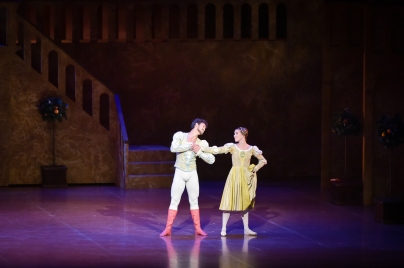 Adhonay Soares da Silva and Elisa Badenes: Petrucchio tries to convince Katherina that he is in love with her. 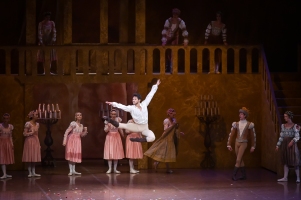 During the intermission: a “portrait” of Alessandro Giaquinto in make-up as Gremio.

Adhonay Soares da Silva during the intermission: deservedly happy and relieved how well the first act has gone. 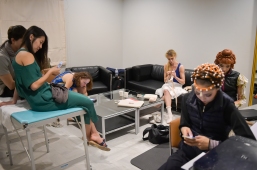 Coming together there, where the wi-fi is most efficient: Hyo-Jung Kang, Louis Stiens, Angelina Zuccarini, Rocio Aleman and Ami Moriat surf the web while Alicia Amatriain sews her pointe shoes. 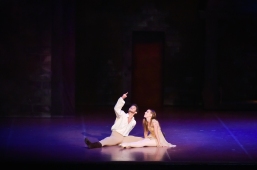 The second act: Adhonay Soares da Silva and Elisa Badenes at the end of the first Pas de deux.

After a sensational debut by Adhonay Soares da Silva and a very successful performance by the entire cast, the company takes a bow before a highly appreciative audience.

Rehearsing for a special moment! Soloist Adhonay Soares da Silva will have his debut in the leading role of Petrucchio in The Taming of the Shrew in Bankok. Artististic Director Reid Anderson explains the final nuances in a Pas de deux rehearsal, together with our Principal Dancer Elisa Badenes. We keep our fingers crossed…

Artistic Director Reid Anderson in rehearsal for The Taming of the Shrew with Elisa Badenes and Adhonay Soares da Silva, who will have his debut in the leading role of Petrucchio in Bangkok.

Nothing is as easy as it looks: even the “gymnastics” on the “horse” have to be rehearsed. Here with Adhonay Soares da Silva and Elisa Badenes.

Practicing the famous “Shrew” lift: Adhonay Soares da Silva and Elisa Badenes double check the position in the mirror, while Ballet Master Krzysztof Nowogrodzki spots Elisa to ensure she does not fall, and Reid Anderson observes the lift he himself danced so many times.

After three very successful performances in Singapore, the company travels on to Bangkok, one of the most exciting cities in the world. At the moment however, the mood is somewhat subdued as the Thai people prepare for the cremation and state burial of their beloved King Bhumibol Adulyadej. The official ceremony will take place on October 26th. Many people are wearing black and all billboards are covered with images of the deceased king with messages of love and respect for this monarch who reigned for an unprecedented 70 years. Nonetheless the company is very happy to be here performing two performances of John Cranko’s The Taming of the Shrew as part of  the 19th International Festival of Dance and Music.

First day in the theater: the dancers on their way to the Thailand Cultural Center.

The load in begins: technical and lighting staff of the State Theater Stuttgart work with their Thai colleagues.

Load in and set up in the Thai Cultural Center: the bare, spares walls of the theater transform at top speed into the colorful sets of Cranko’s Taming of the Shrew.

Julliane Franzoi and Elisa Ghisalberti in the courtyard of the theater.

Sonja von Droste hangs up the signage where to find what – indispensable in a theater which most of the dancers and staff are not familiar with.

Controlled chaos: just before company class in the studio. 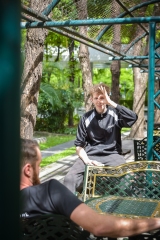 In Bangkok Adhonay Soares da Silva will have his debut as Petrucchio – here in rehearsal with this Katherina Elisa Badenes.

Reid Anderson coaches Adhonay Soares da Silva for his big debut – here with Elisa Badenes. What luck for this young dancer to receive the many valuable tips and information which Reid Anderson has to impart.

Reid Anderson checks on one of the more difficult lifts.

Reid Anderson explains one of the lifts to Adhonay Soares da Silva and Elisa Badenes.

At the same time in another studio: David Moore and Hyo-Jung Kang rehears the Pas de deux of Bianca and Lucentio.

Rehearsal for The Taming of the Shrew: Jason Reilly as Petrucchio makes fun of Katherina (Alicia Amatriain).

Inside the company we call the first Pas de deux from the second act the “Floppy Chicken Pas de deux”. Here you can see why. With Jason Reilly as Petrucchio and Alicia Amatriain as Katherina.

The Shrew (Alicia Amatriain) in top form. With Jason Reilly as Petrucchio.

The biggest challenge in the Pas de deux: the famous lift on the hips.

In the courtyard of the theater a group of girls practices a dance routine and happily pose for our photographer and Principal Dancer Roman Novitzky.

Fabio Adorisio decides to join in.

Jason Reilly and Alicia Amatriain rehearse the last Pas de deux of Cranko’s The Taming of the Shrew.

Now this is the last bunch of photos from Bangkok …. of the second performance of Onegin with great debuts :) 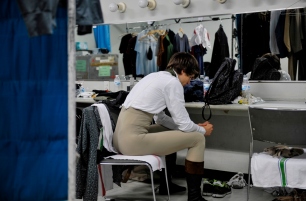 David Moore just before his debut as Lenski 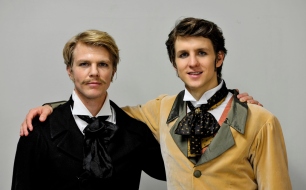 Our fantastic and dedicated dancer/photographer Roman Novitzky with his press badge before photographing the first performance in Bangkok. 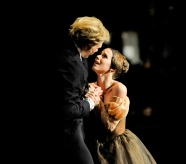 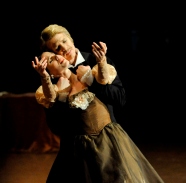 She made it…. Elisa Badenes in the last seconds of her debut as Tatiana in Onegin 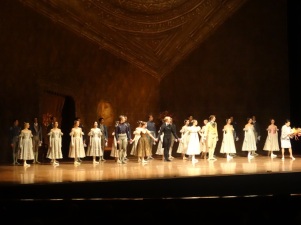 Hello to all of you in Stuttgart and the rest of the world :)

We’ve now savely travelled on to Singapore and finally present you some more photos of our performance on Saturday and beautiful impressions from Bangkok. We’ll keep you posted!

With lots of love, your Stuttgart Ballet

Elisa Badenes prepares her pointe shoes before a stage rehearsal.

The auditorium of the Thailand Cultural Center

Small shrine backstage at which prayers are said before each performance

The beautiful curtain of the Thailand Cultural Center 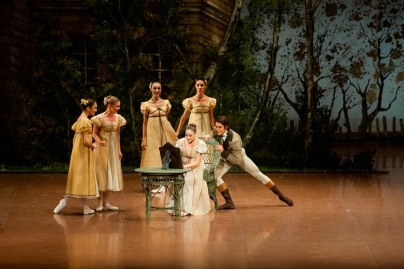 Alicia Amatriain, Damiano Pettenella in the Gremin pas deux of the third act 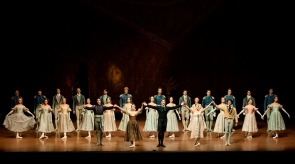 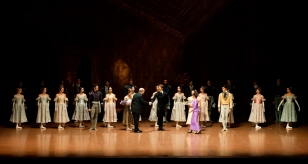 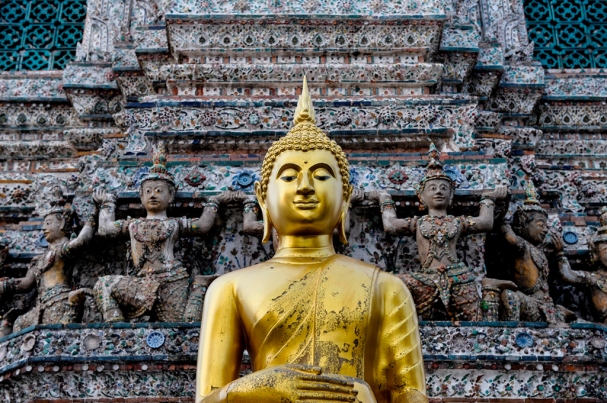